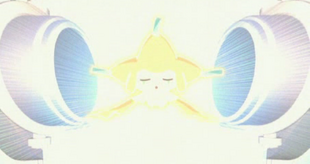 The Poketales Adventures Special is a series of fanon written by Arvee100smart in this wiki. This story happened before Henry set to journey. This is Special Story is all about Henry's past and the return of Jirachi.

It was another calm and peaceful day in Forina. The Brelooms finds food for Shroomish, Some Linoone plays together and some Nuzleaf teaches the Seedot how to balance in a tree.

At the North side of the Forina, lives a family named Patterson. They enjoy living there.

A boy named Henry hurried outside and said, "Mother ! I'm gonna get some Oran berries for you to cook with salad !"

"You may Henry" Henry's mother said with smile. "Just be careful with the Pokemons okay ?"

Henry went outside the North and went West. There, lies all berries.

Just then, a wild Seedot appears. Seedot is quite hungry.

"Here you go. It's the largest Oran Berry you know ^_^" Henry said while giving the berry.

Henry went back to to North, and suddenly...

Their house seems destroyed, scattered all over the places and Henry's Mother lying down.

Suddenly, he saw his father.

"I know, I'm alive.. good thing..." His Father said as he hug Henry. "Listen Henry.. a wild pokemon came here and attack us.. it's dangerous, go to the south and set a journey... you Brother is still ali--- AAARRGHH !"

As Henry saw his Father died, he saw something at his back...

"AAABSSSOOOL !!!" A wild pokemon said as it used Razor Wind, but Henry dodge.

Henry run as fast as he can and lost the sight of a wild pokemon, named Absol.

"So that was Absol... a disaster pokemon.. just like Father said before"

"Remember Henry, not all pokemons are good here in Forina." His Father said. "There once named Absol who is a disaster Pokemon. He is quite stubborn too."

"Father forgot to say Absol is super berserk too -_-" Henry said with sweatdrop. "But... I need food first, let's go to the west first"

Since He was in the middle of Forina, he is facing North, so he took the East side instead of West.

"Ahhhhh" Henry shouted as he lands on a cave.

"Hellooo" He said once more as echoes repeat...

"Wait.... If you said the Millennuim comes... there should be a Millenuim festival !" Henry said recriminising

"I'm Henry. Nice too meet you too."Henry said as they handshake. "Why are you here ?"

"I'm finding the Millenium Festival... is it here?" Pearl asked

"Excuse me, do you know whee is Millenuim Festival ?" Henry asks

"We all come here for nothing.... thank you Pearl... THANK YOU..." Henry said dissapointedly.

"My name's Charlie by the way, a Pokemon Breeder." Charlie said, "Hungry guys? I'll cook for you.."

As the night comes, Henry found new friends, Pearl, which is a Pokemon trainer and Charlie, a Pokemon Breeder. Henry and his friends taken a place that only appear in only 1 night and 7 days every thousand years, The Millennium Comet. They hope to take part on the Millennium Festival, but their True Role in the Legend of the Comet will be Far Greater.. that they could ever Dreamed....

(Henry wakes up and stands, Charlie does the same, which wakes up Pearl too..)

(Trucks comes in the valley..)

(Henry with Charlie and Pearl watched the trucks coming up..)

(Trucks coming closer to Henry, Pearl and Charlie in thei sight as they watch)

(Some trucks stopped, ready to make their places)

Appleplum, ca you handle this? :/

(Opened his wand,  tapped the chest, Balloon jellies comes, with the wand instructing to place the balloons centering)

(Balloon pops, but left a wood , and overall, becomes a circus tent)

(Some train tracks being build so that trains will come and visit Millennium Festival.)

er... let Monet do it again

(Suprisely, some trains have arrived)

(Another day comes and the Millennuim Festival is Ready.) 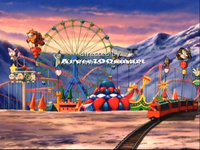 ~ The Story Begins Here ~
Add a photo to this gallery

Day one: Jirachi Awakens once again~Edit

"What's that Pokemon ? I haven't seen that yet.." Henry said as he looks the Pokemon beside Pearl.

"I should be asking you the same thing ! What is that stone !? Youv'e been holding that since I met you !" Pearl said shouting.

"Hmmpt, fine. Anyway, this is Shaymin. I found her lying to the Wanderer Forest." Pearl said. "Let's go out and ride some rides !!!"

"If I saw how he built his circus, I can't wait to see his magic." Henry said.

As the day passed, Henry is seen enjoying the rides with the Still-, Myterious Stone, Pearl is seen eating in some food stands and Charlie is seen flirting with the girls. That night in the Circus.

Retrieved from "https://poketales.fandom.com/wiki/Poketales_Adventures_Special:_Jirachi_Returns?oldid=4574"
Community content is available under CC-BY-SA unless otherwise noted.